It is one of the finest ways to finish in soccer.  The ball is slipped through to the wide attacker, they take a touch to bring the ball slightly inside, open up their body and place the ball into the opposite corner. Shooting from wide angels is a key soccer skill.

The keeper has no chance.  They must protect their near post, but the slight swerve the inside of the foot shot imparts bring the ball back inside the far upright.  Even more spectacular is the driven shot, hit firmly with the laces, which arrows the ball into the far post.  Here it is power, accuracy and taking the ball early which delivers the goal.

In both cases, by shooting across the keeper the chances of a goal are increased.  It is unlikely that the keeper will catch the ball, and even if they get a hand to the shot, the ball with deflect out into the danger area which is the centre of the goal.  A striker running up in support will have the easiest of finishes.

The France and Arsenal striker, Thierry Henry, was deadly at these kinds of finishes.  Like Ronaldo, Mo Salah, Raheem Sterling and Pierre Emerick Aubameyang, he was the kind of striker who liked to position themselves wide rather than straight through the middle.  Take a look at this collection; see how many goals the striker scores from wide, hitting the ball with placement or force across the goalkeeper into the opposite corner.

Opening Up the Body

Here right-footed players should attack from the left, and vice-versa, although once players become competent at the drill coaches can look to develop confidence with the weaker foot.  When this is the aim, it does not matter from which side the attacker approaches.

Player One knocks a through ball inside the defender.  Player one then continues their run to be on hand to pick up any rebounds from the keeper. 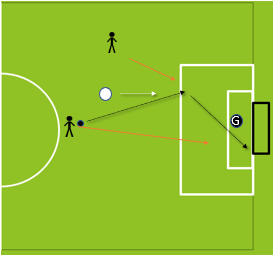 The defender can start a little behind the striker, Player Two, so that there is some pressure applied, but not so much as to make perfecting the skill too difficult.  Player Two runs onto the through pass and takes a touch to bring the ball slightly inside if necessary.  The player strikes the ball firmly with the instep and leans very slightly away to impart power.  Arms must be out for balance, and to protect against a defensive challenge.

The player aims for the far post or slightly outside of it, imparting spin onto the ball as they hit it.  The shot should be outside of the keeper’s reach, but the spin will bring the ball back into the far corner.  If the goalie does get a touch, Player One should be on hand to put the ball into the net.  Players swap roles and repeat.

First Time Across the Goal

Here, the pass is at forty five degrees, and the striker runs on to hit it first time, or after one touch.  Initially, work with the stronger foot to allow technique to develop.  This means that a right footed player will strike from the right hand side of the goal and aim for the left.  In this drill, the shot is struck with the laces, and the foot strikes through the ball.  In order to help keep the shot down, the head is over the ball and the striking leg slightly bent at the knee.  There is a full follow through.

The hips swivel as necessary so that the player’s body is in line with the direction of the shot.  The player aims for the inside of the far post. 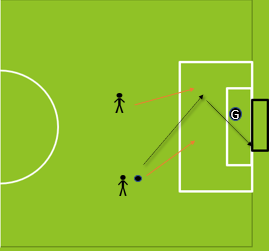 This is a fun drill, especially good with younger players, but who doesn’t enjoy shooting down a target?  Therefore, Adult teams can use this as well.  Set up a grid 30m square and set up cones along opposite ends.  The aim is to pass the ball within the grid to create shooting opportunities.  However, shots can only be taken at the furthest cone from the shooter.  This means that the outside cones will be knocked down first, so the drill becomes easier as it progresses.  First team to knock down their cones (mannequins also work well here) wins. 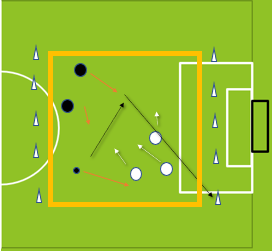 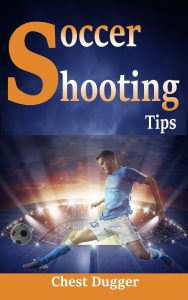 Shoot with Both Feet: 6 Soccer Shooting Drills and Strategies to Become a Two Footed Player