With enough money and sufficient screens, it is possible to keep watching soccer endlessly.  The joy of TV might never match the visceral thrill of sitting (or even standing) among thousands of our tribe, united in the excitement of the game.  Although, of course, Covid-19 has served to end that joy for much of the world.  Temporarily, we hope.  Nevertheless. TV coverage can genuinely help us to improve as players, as well as to watch our favorite teams and the most important matches from the comfort of our beloved armchairs.

With multiple angles, in depth analysis at half time and at the end of the game plus numerous replays from different viewpoints, we really can gain an understanding of how soccer is played at the very highest level.  And if the absence of crowds in the majority of the world’s leagues has rendered atmosphere insignificant (for the first time in its history, the top level of English football is seeing more away wins than home), it does allow us to hear the kind of communication played out at in professional matches.  Many of us will have been surprised that there is not more of this, perhaps, although we can also see that when calls are made, they are relevant and pointed.

We must never lose the thrill of watching soccer because it brings us joy, but the coaches and perfectionists inside us all can also see how watching soccer can help to improve our own technique, or that of our teams.

Here are some suggestions for getting the most out of these kinds of activity.

High level angles covering half the pitch or more allow to see how teams set out their shape.  Two banks of four can clearly be spotted as teams seek to deny space in their own half, and the fluidity of the modern game can be seen clearly as a team moves from, say, 5-4-1 to 3-4-3 on transition.  The diagrams below illustrate this, but far better to watch it onscreen, perhaps freezing the picture to take in what is happening in a real-life situation 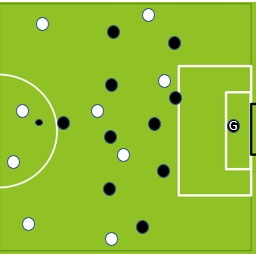 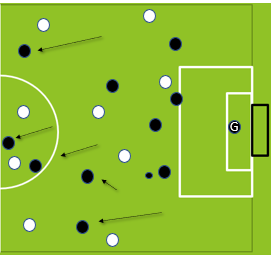 Another strategic move which is common today is the play out from the back to defeat the high press.  Watching a team which uses this method for a while will show that they have developed set plays on the training ground.  The aim is to get a good ball player in space and on the ball in front of the press.  It is a system employed by the English Premier League team Arsenal as they move from the many successful years under their long-time manager Arsene Wenger to a new era under the tutelage of their former player, Mikel Arteta.  The intention is to get the ball to either player P (Thomas Partey) or player X (Granit Xhaka) in front of the four man press and into space to play a ball forward where there is now space for the team’s offense to threaten. 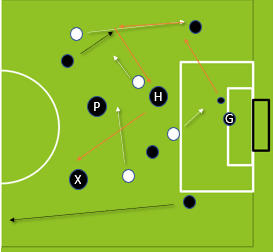 Red lines show movement of the ball; the tactic is to draw the press right, leaving space on the left.

Coaches will also see how their professional counterparts try to negate the effectiveness of the move.  For example, they may have identified player H (Rob Holding, for example) as the weakest passer and player most likely to hand back possession.  They will then try to leave this player as the spare, hoping he will make a mistake, or at least not deliver an effective pass forward.

However, as interesting as seeing tactical strategies on TV might be, the biggest benefit comes from players watching those at the top of their sport utilise technique.

What can be better than seeing a prime Cristiano Ronaldo perform multiple step overs before leaving a full back prone on the floor, or Lionel Messi bring down a waist high ball fizzed into him?  We can watch our favorite players, find videos of them at their best, or simply observe them through a game. Then, when we find an example of something we wish to emulate, we pause and run through in slow motion, practicing the moves before the TV, miming the ball, before taking them into the backyard, or park.

Learn How to Receive a Pass

No professional player representing their club will lack a high level of first touch.  Observation is a perfect way to learn the elements of receiving a pass.  During a match there are hundreds of passes made.  Virtually everyone will see the basic elements of receiving the pass repeated.

How to Make and Close Down Runs

Running off of the ball is one of the key elements of a successful team.  Doing this creates passing options for team mates, space for other players and a chance to get in behind the defense for the player themselves.  Wide angle views, especially in replays, show how, when and where strikers make runs, and how defenders try to position themselves to negate them.  Again, the viewer is learning all of the time.

Watching Soccer to Understand the Game

There is no better way to learn the game than by watching experts play it.  We might develop our own technique more through practice and coaching, but the more nebulous aspects of soccer can really become ingrained through thoughtful observation.  These elements might include:

One final tip; when we watch our own team play, we can get too involved in the game to become truly objective.  Better to watch teams and players we admire, but do not support.  That way we can become learners, rather than fans.