The world’s best players have more in common with the park player than first comes to mind.  While we mere mortals might not earn their multi million dollar a year salaries, drive around in a Ferrari with a Porsche and  a Bentley in the garage or display astonishingly bad dress sense, but all love the game. And that means, from time to time, we miss goals that would be easier to score.  The internet is chock full with compilations of missed chances – there is one we particularly like because it doesn’t feature Neymar Junior or Lionel Messi cocking up, but everyday players like the majority of us.  There is a video at the bottom of this blog. But even at the distinctly ordinary level of these clips, we shouldn’t overlook that there has been great build up play, individual and team, which led to the chances so badly fluffed.  If our side can create goal scoring opportunities then they will, in the end, come to fruition.  The soccer shooting drills we highlight below can help to increase the number of chances our teams convert.

(In the diagrams, the small grey circle represents the ball; red lines equal passes and shots; blue lines movement of players; the cones are stations and circles represent players.) One v One with the Goalkeeper Soccer Shooting Drill

This is a simple but effective soccer shooting drill.  While a first time shot is instinctive, and therefore physical technique is vital, with a 1 v 1 against the keeper the striker has more time to think.  This is not always a good thing, as it can lead to indecision.

Fundamentally, the striker has four options in a one v one: Each option has its advantages and disadvantages, and the decision will be determined by the position of the goalkeeper; the angle of the run; the confidence of the striker and the position of other players, attackers and defenders.

In one of the soccer shooting drills each of the options can be tried, with the starting position of the striker and the inclusion of a defender and/or a fellow striker added as required.

So often with one v one situations, failure occurs because the mental strength of the striker is found wanting.  Suddenly, the expectation is to score, and that adds pressure.

Add a defender and a teammate (marked in red and purple respectively on the diagram) to this soccer shooting drill.

This is one of the great little soccer shooting drills, brilliant with young players especially, which encourages both shooting and looking for rebounds.  Best of all, it is easy to use and has no complex techniques to work on.  Improvement comes through practice. The coaches should be prepared to comment on shooting technique and runs from the strikers.

Two goals are placed 30 metres apart, and there is a line halfway between them.  Lots of balls are needed.  Each team has seven players: one ‘keeper, four shooters who must stay in their own half and two strikers who look for rebounds and deflections.  Swap roles regularly, and encourage the strikers to run in on goal after every shot. Finally, we should never forget the one fundamental that makes soccer the most popular sport in the world.  The single aim is to score a goal.  But that is a rare achievement.  Sometimes, often in fact, it does not occur during the entire game.  This causes the player to miss more chances. 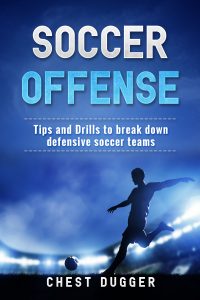