They are often considered the odd ones out.  The players who train by themselves, require different skills; and different soccer fitness; you have to be mad to be a goalkeeper.  Or, at least, a bit different.  That is changing, however.  In the best teams these days – and these are sides to which we should all aspire – the keeper is more than a big guy with safe hands.  More even than somebody who can thump the ball into Row Z of the empty bleachers.

Current thinking sees the keeper as the starting point to attacks.  Somebody with good enough ball skills to have a good first touch, and to be able to pass accurately.  A modern keeper needs to have the vision to start attacks with a quick throw or a long pass – all on top of keeping concentration, inspiring confidence in the defense and making saves as needed.

So, you don’t have to be mad to be a keeper, but it helps to be multi-talented. You also have to be in good shape.

One key skill for a keeper is the ability to recover from a dive.  Many shots will be parried, and although it is safest to deflect the ball for a corner, to give the defense time to re-organize, that is not always possible.

For this drill, there is a shooter, two rebound players and a keeper.  Because the aim is to get the keeper moving from side to side quickly, a lot of balls need to be available.

The shooter shoots or throws the ball for the keeper, making him dive to make the save; if the ball is caught or deflected for a corner, another shot immediately follows to the other side of the goal.  If a shot is parried, the rebound players seek to get in a shot for which the keeper must recover.

The physical conditioning for this type of activity can be worked at in the gym or at home.  Sit ups develop abdominal strength.  Another exercise (requiring a mat, or soft surface such as grass) involves lying flat and laterally on your side, then leaping up, and getting down the other way, and repeating the drill.  This develops spring, speed and abdominal strength.

This is very much a soccer skill for today, where the goalkeeper is employed as a creative player to start a move.  The soccer training drill requires two full back, the keeper and an offensive player to pressure the keeper.  A full back gives a back pass, the keeper shows a good first touch to take the ball away from the on rushing pressure player, and then plays a pass out to the other full back.  The drill is then repeated.  It can be developed by the striker starting with a chip to the keeper, and the full backs starting narrower.  They then pull wide and the keeper throws or passes to one of these team mates.  As the keeper improves, more players can be added. 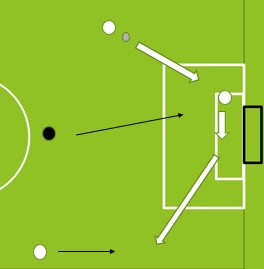 This drill seeks to help keepers get their angles right.  They need to adopt a position where the smallest part of the goal possible is available to the striker.  The drill is simple.  Some attackers take shots from various positions on the pitch, the keeper quickly moving to cover the correct angles.

The drill can develop into a rondo style session, with four attackers and two defenders.  The offensive players pass laterally and get into shooting positions, the keeper moves to cover the correct angles. 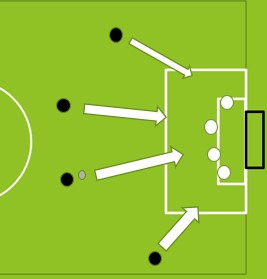 Goalkeeper Training Drill 4: One v One

This is a natural development from the drill above.  This time strikers move at pace towards the keeper, before either dribbling around or shooting.

The key skills for the keeper to practice are: 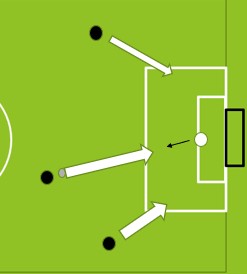 Being able to deal with crosses fills the defense with confidence. In the simple training drill below, the ball is thrown or crossed from various positions.  One attacker seeks to put the keeper under pressure.  The keeper concentrates on taking the ball at its highest position he or she can reach; making the decision whether to catch or punch (punching being less ideal, but easier.)  Punches seek to be delivered with height and distance.

This training drill can be made more realistic with the addition of more attacking and defensive minded players, to recreate the match situation. 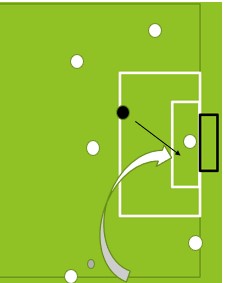 Practice can be carried out at home with a wall.  Using the rebounds, aim to take the ball at the highest point possible.

There are many other soccer skills a keeper can work on – concentration (try shouting at the defense nonstop, it focuses the mind), reflexes (practice catch a small ball, like a tennis ball), communication.  Here are some examples of what keepers could aspire to, with some of the best saves of recent years.

If you loved this post, you’ll love our book below on Soccer Fitness. Can you Build a Titanic Soccer Defense with Your Players? Here’s What We Think….

3 Soccer Defensive Drills to Shut Down the Opposition