What’s the Value of Set Pieces and Soccer Formations? Statistics sometimes offer enlightenment.  Consider the current positions of the teams in the English Premier League compared with the value of their squads.

The top five positions are filled by Manchester City, Chelsea, Liverpool, Spurs and Arsenal.  City’s squad is by far the most expensive in the league, costing more than £866 million, or substantially more than a billion dollars.  Their squad costs so much more than any other that really anything less than a stroll of a season represents underachievement.

Chelsea are the fourth biggest spenders, then Liverpool are third in both leagues.  There is a substantial drop to Spurs and Arsenal but both are in the top six when it comes to spending.  Manchester Utd are slightly out of line at the moment, being seventh in the league but owners of the second most expensive squad.

But there are anomalies: the fifteenth biggest spenders are Bournemouth, the team of a tiny south coast town currently sixth in the Premier League, while Burnley are regularly at the bottom of the spending charts, yet finished high enough to qualify for Europe last season.

How can we explain these anomalies?  There are two main ways:

Because any team can be good at set pieces.  In this blog we look at four basic soccer drills which can help weaker teams to get vital goals, particularly against better opponents.  We will look at long corners, short corners, attacking long throws and direct free kicks, with a useful basic soccer drill for each.

For this drill, the corner is taken by a right footer from the right hand side, and a left footer from the left.  The best deliveries are firm and flat.  While the aim is to land the ball in exactly the spot targeted, drawing the keeper off of their line, in practice a flick on – deliberate by the near post attacker or inadvertent by a defender – can be just as effective.

The basic soccer drill shown below is the final stage. It is best to develop slowly, beginning without opposition to develop both the corner takers’ and the runners’ accuracy.

The soccer set piece play consists of five attackers plus a corner taker.  There are six defenders – five plus a keeper, with three marking zonally and two looking to man mark.

Four attackers line up around the penalty spot.  They must be tight together, so they cannot be man marked.  Player One (nearest to the goal) always does the same job, but the other three agree their runs prior to each corner, to make them harder to track.  Player One’s role is to prevent defenders man marking, and then he drops back to the edge of the penalty area for any rebounds.

Players two to four make one of three runs – near post, centre of the goal or far post.  The fifth attacker is position for the flick on.  Signals are agreed, and as the corner comes in, players two to four break to make their runs.  Their closeness to each other makes tracking them very difficult.

The aim of a short corner is twofold.  Often, it is to create an overload of attackers to allow a cross from a more advantageous position.  But also, the defensive team need two players out of the box to defend a short corner, and that means the penalty box has a little more space, which is to the benefit of the attacking side.

The soccer formation can be worked with just two attackers and cones to represent other players.  The addition of one or two short corner defenders, and a goalkeeper is the first development, then a full corner situation can be drilled.

The best long throws are flat and fast.  Their aim is to cause confusion and draw the keeper off his line.  It does not matter if the throw hits the attacking target of the crowd of defenders marking.  It is the second ball that is the dangerous one, as runners seek to get on the end of any rebounds.

The long throw is quite a specialist drill.  Firstly, the thrower must be able to deliver the ball onto the six yard box.  The target is the biggest player in the team, who is looking to get any kind of touch – or hope that the defenders will help out with their own misdirected header.  Four players then attack the second ball, taking the near post run, the central run and one to the far post.  The fourth player holds their position for rebounds.  The drill works best with two defenders who try to intercept the throw, and a keeper who decides whether to go for the ball or not.  These are alongside the thrower and five attackers. 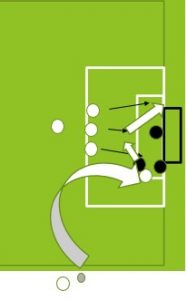 The free kick that flies directly into the goal is one of the most exciting sights in soccer.  There are many different types of kick, requiring different skills when striking the ball.  In this basic soccer drill, we use three defenders in a wall plus a keeper, with an attacker on the inside of the wall whose aim is to block the keeper’s view.  A third attacker makes a run from deep for rebounds.

The taker is looking to curl the ball.  Therefore, a right footer will take kicks from the left hand side, and vice versa.  Depending on the amount of curve needed, the taker adjusts the angle of their run – the straighter the run up the less in-swing gained.  The striker hits the ball with the front of the instep, striking firmly with a follow through heading in the direction the ball should travel.

Most teams will seek a left and right footed free kick specialist.  Everybody likes to have their turn, and training is the place to allow this since undiscovered talent might come to light. 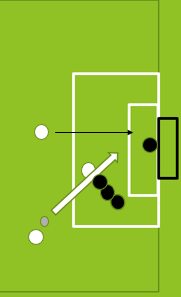 Between a quarter and a third of goals scored come from soccer set pieces.  They are an important part of the game, a great evener, and time spent practicing them (defensively as well as offensively) is time well spent.

If you liked this blog post, you’ll love our book on Basic Soccer Drills for Kids below.