One of the game’s attributes that made a winger great was that they could focus on their attacking responsibilities. Even the most recent of those players, Pires and (until the end of his career) Giggs had little in the way of defensive duties.

The Wonder of the Soccer Winger Position

How about this for a list of fine soccer players:

These players – and there are many others we could add; Luis Figo, Ryan Giggs, the great Jairzinho – are, of course, all wingers.


In fact, ironically it was the time of the peak of Pires’ and Giggs’ careers that the winger started to disappear from formations.  While the visionary Arsene Wenger and Sir Alex Ferguson dominated the top of the Premier League, employing wingers, elsewhere in the world coaches were deciding that such players were an indefensible luxury, a slice of cream cake after a dinner of staples.  The answer to winning games, coaches decided, lay in winning the midfield.  Therefore, this area of the pitch became over crowded with players of both teams, stultifying creativity.  A look at a typical ‘squeeze’ formation taken from coaching manuals of the turn of the millennium illustrates the point. 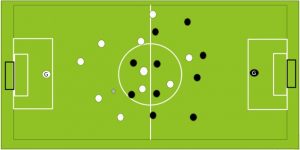 
Even the maestro, Zinedine Zidane – surely the greatest Number 10 of his era – was more frequently asked to play as a widish midfielder rather than in the position he could do most damage.  How would the coaches of that time have coped with a Matthews or Gento?  It is hard to imagine them entering the annals of soccer history as wide midfielders.

In fact, until quite recently, a player as fast as Gento would probably have found himself as a wing back, expected to track up and down the line in a five – three – two formation.  The diagram below illustrates the point.

He could then be criticised by all-knowing pundits who bemoan the fact that players do not know how to defend any more.  It’s  hardly surprising when full backs and wing backs are converted wingers.

But, we can be glad to say, the winger is making a resurgence.  Yes, they never completely went away.  Bayern Munich built their current levels of success in Europe and the Bundesliga on two great wingers – Franck Ribery and Arjun Robben – but more often these kinds of players would be turned into defenders or centre forwards.  Consider Ronaldo, the Portuguese striker is the perfect winger, although to be fair his success as the central man could hardly have been bettered.


However, let us consider some of the best club sides in the world at the moment.  At Real Madrid, Gareth Bale might not be the first name on the team sheet, but when fit and firing, his winger’s skills can destroy the opposition.  The Brazilian Malcom is one of the most highly regarded young footballers in the world.  The Manchester City of Pep Guardiola frequently, but not always, employ two wingers who play genuinely wide in Raheem Sterling and the talented, if inconsistent Sane.  Champions League finalists Liverpool use their own Sane along with Roberto Firmino and Mo Salah interchanging in the other wide role.

And that is all good news.  As the diagram below shows, using wingers when on the attack creates enormous space for team mates; it allows the room for Number 10s to make their decisive passes and exposes full backs to one v one situations which they would rather avoid. 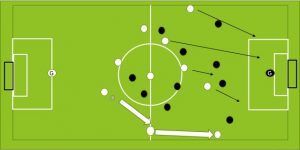 How the game has most changed, though, is in what happens when the ball is lost.  Then the wingers press from the front, and if possession is not won back quickly, then retreat to make a five man midfield which denies the opposition time and space on the ball.

Every fan wants to see wingers in action; they are the thrill providers of soccer – little is better than watching a defender left for dead as their opponent speeds past them.  The good news is that coaches are seeing once more the value in these players.  And if you are not convinced, watch the clip below.

That will surely settle the argument.

If you liked this blog, you’ll enjoy learning about soccer formations and drills that will let you play 2 wingers in your team.

Is a lack of Mental Toughness hurting your Soccer Game in 2022?