Soccer is about scoring goals.  Soccer passing practice sessions by defensive coaches indicate that they are getting increasingly good at training their players to stop this.

This has led to a huge increase in the importance of the transition phases of a game – the point at which possession changes.  We know that the current trend is for full backs to push forward, acting like wingers.  Midfielders increasingly have the freedom to get ahead of the ball.  This all leads to more exciting soccer, which we applaud, but it also means that when possession is lost, so the chances of scoring increase.

Taking the 2016 European Championships as an example, an incredible 77 out of 108 goals were scored as a direct result of transition in possession; even more astonishingly a small majority came from possession changing hands in the defensive third of the pitch.

Soccer Skills – The Importance of Anticipation

Therefore, the role of defensive midfielders and center halves because even more important.  They are the players who will often intercept the pass that leads to the break and a goal.

Lucas Leiva, the Lazio and Brazil defensive midfielder is a master at this, achieving an average of almost three interceptions per game.  The Leicester City and England defender, Harry Maguire, captures, on average, two passes per game.  His value is on the increase, with interest in his future displayed by many leading clubs in Europe.  Perhaps more surprising is that the Manchester City attacking midfielder and Spanish international David Silva comes close to this average.  This is particularly impressive given that Manchester City tend to dominate possession in matches in any case.

So, how to increase our team’s ability to win the ball through the interception of a pass?  Here are some drills to illustrate the point.

In the soccer practice drills below, the white and black dots are players in opposing teams. The grey is the ball.

Divide the playing area into three zones, the central one being narrower than the others.  The game is 4v1.  The larger team are split between the two end zones, and must pass between them.  A maximum of three touches is allowed in the zone, the third being the pass back.  The player in the middle tries to anticipate the pass and intercept.  When successful, he swaps with the last opponent to touch the ball.

The drill helps to develop anticipation in defenders. 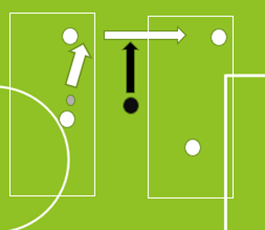 The soccer practice drill set up is as above, but this time the number of players in each zone increases to three teams of six.  The aim is the same as before, but there is no restriction on the number of passes.  One player from the central zone is allowed to press the ball in the end zone, and the remainder of his time move to anticipate the pass and allow the interception.

As well as developing attackers’ ability to find a good pass, the drill helps teams to defend collectively, working together to intercept passes.

This soccer practice drill works with two teams of five, including a goalkeeper.  One team is placed 1-0 up.  They begin with the ball, and must pass it to keep possession.  They are not allowed to score at this stage.  The opponents must win the ball back, by intercepting a pass (no tackling is allowed).  When they have won the ball, they try to score.  Once they succeed, they become the team in possession.  The coach puts a limit of touches on the ball depending on the ability of the players.

This drill develops anticipation skills, and allows players to develop their awareness of risk when they make a wrong decision over an interception. For this soccer practice drill, there are two teams of between three and six, the more players, the easier the drill is to complete.  The drill uses half of the pitch.  Two sets of ‘gates’ are set up on either side of the pitch close to the half way line.  One additional player (it can be the coach) must remain in the centre circle.  He plays for whichever side is in possession.

The attacking side must try to create the space for a goal scoring opportunity.  A limit on the number of touches can be imposed by the coach, depending on the ability of the players. The defensive side must aim to intercept the ball, but then turn defence into attack.

They can either play the ball to the coach, or aim to pass it through either of the gates to an ‘imaginary’ attacker who would launch a counter attack.

This drill develops intercepting skills, but also creates the opportunity for decision making to turn defence into attack.

Although we see from statistics that interception in a team’s own half is more successful for creating scoring chances than an attacking half interception, nevertheless, some of the most successful teams, including the great Barcelona teams of the last few years, and the re-emergence of Liverpool as a European power, work hard at pressing defenders on the ball.  This forces teams to hit long, hopeful passes forward, and possession is regained.

For this drill, we have four defenders, including a goalkeeper. Working across a half pitch works well. The attacking side pressing the ball have three forwards and two defensive players whose aim it is to intercept the long ball.  The ball begins with the goalkeeper, and he must roll the ball out to a team mate.  The defensive side must aim to pass the half way line with the ball under control.  The attacking team aim to pressure the ball, leading to a mis-pass and an interception.  When they make the interception, all players on the team can come forward to create a goal scoring opportunity.

This drill encourages attackers to work as a unit as they need to press together to force the misplaced pass.  They also need to develop positional sense as if they get too close to their defender, the ball will be passed around them.  Finally, it encourages rapid full team attacks at the point of transition. Soccer is changing; the long ball, set piece game, while still having its place, is fading.  Teams who can win the ball through the interception of passes will become increasingly successful.

The video below has an example of such a drill:

Now, that you know to incorporate soccer passing into your team’s daily soccer

plans, let us introduce you to a new soccer practice philosophy – Soccer Rondos in our next blog post. Check it out here.

If you loved this blog, then you’ll love our book below…..