The debate still rages.  It always will.  Who is the greatest player of all time?  The soccer goat?  Three names, these days, generally top the polls.  The magnificent Pele and the irrepressible Lionel Messi are two of them.  The third is no longer with us, the pocket battleship, Diego Maradona. The common thread among all three is skilled speed dribbling.

While the first two seem as perfect as role models as they do as soccer players, the same cannot be said of the little Argentinian.  Still probably remembered best for the hand of God goal, when he used his fist to send England flying out of the World Cup in 1986.

But it is his other goal in that game which occupies us today.  The incredible dribble, starting deep in his own half, which seems him weave past countless defenders – on a rutted pitch, no less – before leaving keeper Peter Shilton on his backside and slotting the ball home.  The greatest goal of all time?  Probably.  From the best player of all time?  Possible.  And if he was not quite that, it is hard to dispute that Maradona was the greatest dribbler of all time.

The maestro died, too young, at the end of 2020, a lifetime of bodily abuse finally taking its toll.  But let us look at some drills we can use to help players improve their own dribbling at speed, to ensure that they do not lose control of the ball at pace.  We might not find another Maradona – probably nobody ever will – but we can improve the skill and technique of our players.

Speed Dribbling with the Ball

A very simple drill to begin with.  A dribbling relay which adds competitiveness for pressure, but where the simplicity of the drill allows a focus on technique.

Players are divided into two teams, and a 30-metre track is laid out.  Players dribble to the end, stop the ball, turn and pass back.  The next player then goes.  First team to finish is the winner. This is another straightforward drill which has plenty of action.  Set a narrow pitch 30 x 20 metres with a goal at each end.  Players line up with a ball at one end.  The first player sets off aiming to dribble at speed using the technique above.  As they approach the keeper, they slow down and bring the ball closer to their bodies.

Still moving, they either shoot or try to round the keeper and score.  They then move to try the same in the other goal.  Meanwhile, the next player sets off.  The better the players, the closer together they can be set in play. 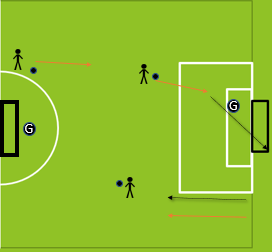 There are a number of dribbling drills that can be tried using a large, 20 x 20 metre square.  These include: This is a fun activity to use with younger children.  It can become quite chaotic, so the coach needs to keep a careful eye.  The group is divided into four even teams, and each team has a home square.  The playing area is 30 x 30 metres.  With better players, this can be smaller.

A number of balls are placed in the square – not quite enough for every player to have one.  The players begin in their home square.  At the whistle, the players rush to the square and try to dribble a ball back to their own square.  Any ball which leaves the square is out.  Players can tackle.

Then the second phase begins.  Now players must dribble the ball to the opposite square.  Those without a ball are allowed to try to win one or knock one of the other teams’ balls out of the large playing area.  Once the ‘target’ square is reached, the ball is safe.  The winning team are the ones with most balls in their square at the end.  The starting set up is in the diagram below.  So, for example, the team in the blue square will firstly attempt to dribble as many balls as they can, up to three, into their blue square.  Then, in phase two, they will try to get them, plus any more then can ‘steal’, to the yellow square.  Meanwhile, the grey square team will attempt to get their collection to the orange square, and so forth. 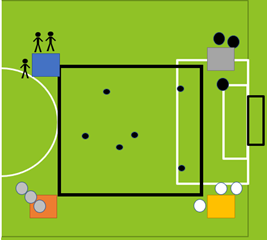 The video clip here offers some good tips on dribbling.

Most importantly, however, is players need to practice with a ball at their feet.  If your club has the resources, try to ensure every player has a ball all of the time.  They can then dribble it from drill to drill.  Warm ups should include a ball the majority of the time as well.  Players of all ages will naturally dribble a ball if they have one.  A dribbling course makes an excellent ‘arrival’ drill.  The challenge is already in place, players simply collect a ball on arrival and use the course.  Younger players will very quickly develop their own challenges and games.

The best way to improve one’s dribbling is to practice.  The coach becomes just a watchful observer, ready to correct a technique or suggest a new challenge or skill.

If you liked this blog, you’ll like our book on Soccer Individual Drills at Home.