We recently spent some time considering the hook turn as useful technique for both retaining possession and beating an opponent.  Below are some simple to use soccer drills which will help players of all ability levels and experience to master and reinforce the two forms of the turn.

In the diagrams, the orange arrow colored lines relate to dribbling with the ball, the black arrows show the movement of the ball when passed or shot, and white arrows show movement of players when they do not have the ball.  The small black dots represent a ball.  White dots show opposing players.

Basic Soccer Drills To Practice the Inside Hook

Set up several courses for this drill so that a number of players can practice at the same time.  Although simple, the drill allows players to really focus on technique and master the skill.

Set up three cones approximately ten meters apart.  Players wait by the first cone.  Three or four can use each course – more than that and there will be too much waiting around, especially for younger players.  One ball is needed per course.

Player one runs with the ball from cone one to cone two, knocking the ball ahead of them using their laces; they should require only two or three touches to cover this gap.  At the middle cone, they slow down, as though approaching a defender.

Staying on their toes, they use their laces to cover the distance to cone three.

As they pass this cone, they lower their hips to make change their center of gravity, and stretch forward with their outside leg, hooking the ball on its forward face with their instep. They drag the ball back to the other side of the cone – it does not matter whether they go inside or outside of it, or which foot is used.  In fact, both feet and directions can be worked on.

Their body will naturally move past the ball, and they use their arms for balance and to help protect the ball from an imaginary opponent.  They sprint onto the drag back and place a long firm pass back to the next player, using their instep, for them to take their turn.

The same drill can be used to practice the basic outside of the foot hook turn.  The only real differences are that the close control dribble leading up to the turn is best with the outside of the foot, to disguise the actual turning point and the shoulder drops immediately prior to the turn for disguise and to facilitate a more rapid turn.

Beating a Player Using the Outside Hook

For this drill, set up four cones.  Cone one and two are ten meters apart, as are cones three and four. Cones two and three are closer together, just one to two meters apart.  The more skilled the players, the closer together these cones are placed.  Practice the drill using at least three players, with two starting at one end and at least one the other.  One ball is needed per group.

Player one dribbles at pace towards the central cones.  As they approach cone two, drop the pace and bring the ball under closer control.  Use this close control to go past cone two.  At cone three, knock the ball slightly forward with the outside of the foot.  Drop the shoulder and bring arms out for balance and protection of the ball.  Bring the outside of the foot beyond the ball and drag it backwards.  Using the hips and a low center of gravity, drop and turn tightly, accelerate onto the ball and knock it back towards cone two.  At cone two, repeat the turn sharply.  This replicates the match situation where the double turn beats the player.  Knock the ball forwards towards cone four and run at pace with the ball to this marker.  The next player repeats the drill heading in the other direction. 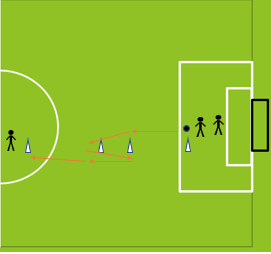 Use the skill with a double turn to lose the defender, and, from a central position, use the instep for accuracy to shoot past the keeper.

This is a fast-paced drill.  Players each take one side of a 10 m square.  A defender is in the middle.  Player One dribbles into the square and uses the turn to beat the defender.  However, this time it does not need to be a full one-hundred-and-eighty-degree turn, it can be a quarter turn.  The ball is passed to a team mate outside the square, with that player then repeating the exercise.  Once the pass is made, the player sprints to the side to which they have passed.

Enlarge the grid and add a second defender.  This will encourage quicker turning to allow the pass to be made.

Set up a five v three game on half a pitch.  The team in possession must pass quickly to isolate a defender, they then run at the defender, use the hook turn to create space for either a direct shot, or a pass to a player now in a better position to shoot. Add in an extra defender or set a time limit for getting the shot away.

There are some further good turning drills to be found at:

If you liked this blog, you’ll also like our book on Soccer Individual Drills at home.