This mostly winter variant of soccer is excellent for developing offensive skills, but sometimes the defensive aspects of the game can be forgotten.  Coaches, understandably, look to use their access to a perfect playing surface to coach offensive techniques, particularly first touch, dribbling and passing. However, futsal drills can provide opportunities for work on the defensive aspects of the game, which can often be transferred to the grass based 11 a side game.

An amazingly simple drill which is also extremely tiring for the defender, so players need to rotate regularly.  Set up a small grid, approx. 5 metres x 5 metres.  Attacking players are positioned along the outside of the grid.  The drill can be 3 v 1, or for less experienced or younger players 4 v 1.

The attackers pass the ball between themselves; the defender must close down the space and try to stop the pass or intercept the ball.

Make the grid larger and introduce a second defender to encourage communication and teamwork.

The defender cannot always prevent a shot, but they can attempt to weight the odds in their team’s favour.  For this drill, the whole court is used.  The coach plays the ball into the striker, who must turn and try to get in a shot. The coach shouts ‘left’ or ‘right’ which is the foot the striker will try to use to shoot.  They score three points if they do shoot with this foot, one if the other foot is used. Their score is doubled if they score.  The defender’s job is to ensure that the striker uses the OTHER foot to shoot or fails to get a shot away.  They score two points if they succeed in this.

The defender cannot move until the striker touches the ball.  He or she then sprints to get goal side.  They angle their body and position themselves so that a shot with desired foot is difficult.

Coach calls the foot to use AFTER the striker has control, forcing the defender into making a later decision.

This is a great drill for developing concentration.  Set up a 20-metre x 20 metre grid, or 15 m x 20 m rectangle is space dictates.  Use cones to create 10-metre-wide goals on two of the opposite sides. These goals are numbered One and Two.

Players work in pairs, four pairs per grid, with one ball between each pair. Player one dribbles around the grid while their opponent shadows without looking to win the ball.  At regular intervals, the coach shouts out either ‘One’ or ‘Two’.  At this point the striker must try to dribble their ball through the appropriate goal, while the defender attempts to stop them.

The drill ends either when each attacker or defender has succeeded, or when the coach has allowed enough time, for example, fifteen seconds. 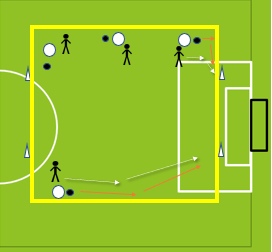 Add goals onto the other two sides, encouraging the defender to constantly adapt their positioning.

The same grid is set up as before, with this time just the one ball.  The pairs act as before, although only one has a ball.  When the coach calls out which goal to attack, the aim for the offense remains to dribble the ball, with control, over the line.  The player with the ball acts as before, his or her three team mates, must sprint to their nearest outer line of the grid, then re-join as support players.

However, it is the defense upon whom we concentrate.  The defender working with the dribbler acts as before.  Their team mates must support to stop the ball being dribbled over the line. To make the drill harder for the defense, make it into a Rondo by adding one or two ‘spare’ attackers.

In the diagram, the white dots represent attackers with the ball, the grey dots the positions to which they have moved after the coach identifies the goal to attack.  The black figures are the defenders shadowing, with the yellow framed players demonstrating the defensive position they take up after the call.

This is a straightforward match which places the defense at a numerical disadvantage.  Therefore, they must work hard to get behind the ball, support each other and communicate.  The aims always are to drive the ball further away from goal and to make passing and shooting as difficult as possible.

Have two four a side teams including goalkeepers.  Two additional players wear bibs.  These are always on the side of the team in possession.  Play the game.

A handy tutorial with live play can be found at:

If you liked this blog, you’ll like our book on Soccer Fitness below. 4 Futsal Strategies to Make the Most of the Indoor Season